Michael Cashmore is an English composer and musician currently living in Berlin. His first involvement in music began in the early 80's when he started experimenting with tape machines, acoustic instruments and super 8mm film. Around that time he founded the group Nature And Organisation who made several live performances, and later in the 90's released several recorded works.

After becoming a member of Current 93 in 1990 Michael began writing music almost exclusively for the group. Since moving to Berlin several years ago, aside from his work with Current 93, Michael began recording albums under his own name - the first of which "SLEEP ENGLAND" was released in 2006 followed by the mini-album "THE SNOW ABIDES" in 2007 which features all vocals by Antony (Antony and the Johnsons) and texts by David Tibet.

Michael released a collaborative CD EP "GABRIEL AND THE LUNATIC LOVER" at the end of April 2008 with singer Marc Almond which featured adaptations of poetry by Count Stenbock. Spring 2011 sees the release of all the collaborative work between Michael and Marc Almond with the album "Feasting With Panthers" which features some of Marc's favourite poetry set to music by Michael. With all vocals by Marc Almond and all music composed, played and mixed by Michael Cashmore this 13 track album is released on June 6th through Cherry Red Records / Strike Force.

The English Bar Company sells original styled antique bars/pubs for home and residential use. The bars are sold direct and manufactured exclusively for sale on englishbars.com.

The current styles offered include:

And the newly introduced,

KYTileCloseouts specializes in discounted premium tile. The selection includes a variety of closeouts, end of production run, excess, seconds, firsts – and any other possible way a manufacturer decides to blowout their inventory at a reduced price. 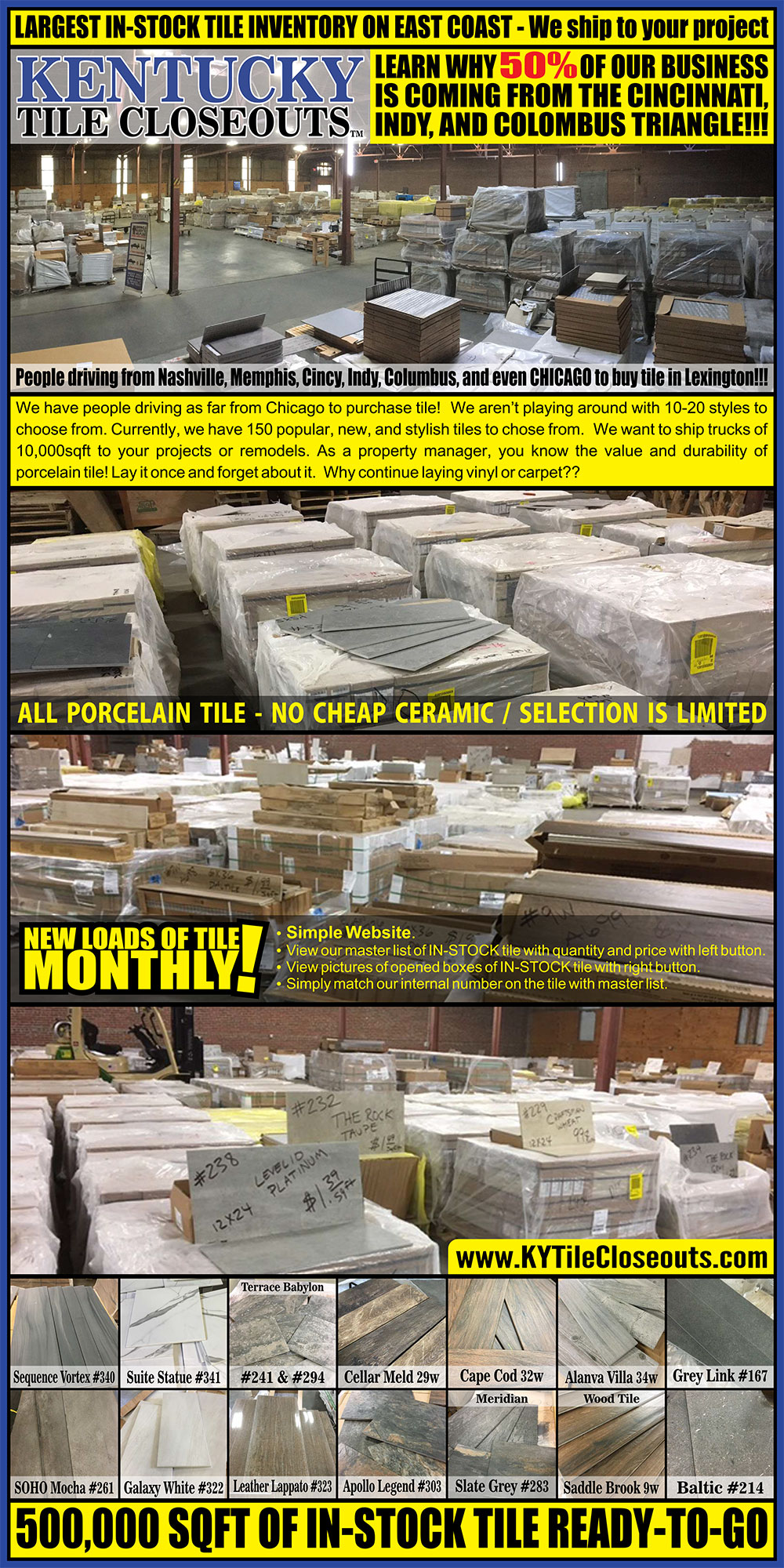 The warehouse inventory is a mix of premium first choice and second choice excess tile inventory. Our focus is offering high-quality porcelain tile that normally exceeds $5 sqft for sale in the $1-2 price range. In fact, some closeout tile deals have exceeded $9 sqft and sold by KY Tile Closeouts at .99 cents sqft.

Our inventory changes often as new inventory arrives. We are not a tile shop in the common sense of the word. We are a closeout tile warehouse. This is warehouse shopping with no design help, handholding, cup of tea, commissioned sales force, nor assistance in loading. You will receive less help and be left to make your decision in private. Warehouse shopping is not for everyone. Although our inventory of in-stock tile is one of the largest in the state of Kentucky, you still have a greater choice of colors at a regular tile shop (at regular price) – as they can order the full catalog from various manufactures. We are not your full service tile shop. Our tile inventory should satisfy the serious discount shoppers with an amazing choice of colors and sizes.

If you like to save money, you just found your tile warehouse!